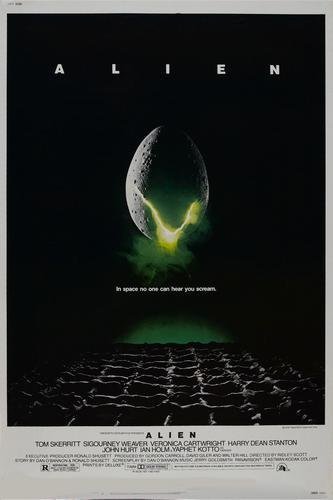 Science fiction posters are wonderful to look at because most of them contain great color combinations and a lot of different creatures. Today, science fiction movies have great posters and maybe it’s every graphic designer’s dream to create a sci-fi poster for a movie even just once in his life. With emerging technology, it is now much easier to come up with and create designs for sci-fi posters.

But did you know that years ago, during the time when the technology for creating graphics was not that good yet, people were still able to make wonderful poster designs? Yes, that’s true. And if you’re curious about these designs, here are 20 classic sci-fi posters to admire.

Product
Visual
Where to Buy

Star Wars: The Empire Strikes Back

Beyond the Time Barrier

Invasion of the Body Snatchers

I Married a Monster from Outer Space For mid-century films, it is usual to see posters with a newspaper theme because, during that time, Hollywood studios commonly produce films which storylines were ripped from the headlines. This poster of Red Planet Mars is probably the best among those newspaper themed posters because its feel made the newspaper design look extreme. Red Planet Mars is a 1952 American science fiction film which starred Peter Graves and Andrea King. If you want to have this poster, you can purchase one here. This poster is from the 1955 movie, The Atomic Man or also known as Timeslip. This is one of the fanciest posters in the list and also the one most rooted in modernism. This was a black and white science fiction film which is based on the science fiction novel, “The Isotope Man” by Charles Eric Maine, who is the same man who wrote the film’s screenplay. If you want this poster, you can purchase it here. This is one of the posters that set the standard for science fiction posters at auctions. In fact, it sells from three to five thousand dollars each. Well, that’s not surprising because it contains all the elements that people expect as a representation of the genre. Invasion of the Saucer-Men is a 1957 black and white movie released by American International Pictures. If you like this poster, you can purchase a copy of it here.

4. Star Wars: The Empire Strikes Back The poster of The Empire Strikes Back is probably the best among all the Star Wars film posters. It features the mask of Darth Vader, Han Solo and Princess Leia, and as well as Luke Skywalker. The Empire Strikes Back is the fifth episode of Star Wars. It was also in this film were the famous relationship between Han Solo and Princess Leia were built. If you’re a Star Wars fan and you like this poster, you can get one here.

5. Beyond the Time Barrier This is a beautiful, classic sci-fi poster with an amazing typography, to think that it wasn’t made using a modern computer. Beyond the Time Barrier is a 1960 sci-fi film which is about time travel. If you like this poster, you can purchase one here. This poster features a fantastic dark background with the collaged concentric circles, imagery, tagline, and a wonderful image of Gog, making it really good-looking. Gog is an independently made sci-fi film released in 1954.  It is the final feature film in Ivan Tors’ Office of Scientific Investigation. If you want to get a copy of this poster, check it out here.

7. Invasion of the Body Snatchers This film’s poster is indeed unique and did not use any cliché designs. Plus, the handprint design on it made it look really good, which the designer used as the primary image which binds all the elements present on the poster together. Invasion of the Body Snatchers is a 1956 sci-fi horror film released by Allied Artists Pictures. If you’re fascinated by this poster, you can purchase one here.

8. I Married a Monster from Outer Space This is a very simple poster with a combination of red, yellow, and black that will make it stand out even on a crowded wall. Though it is simple, the film it represents is surprisingly good. It is a 1958 American sci-fi film from Paramount Pictures. It was about a woman who began to realize that her husband wasn’t the man he was before they got married. This poster can indeed tell the film’s story in spite of its simplicity. If you’d like to have a copy of this poster, check it out here. This is a poster that really depicts the actual content of the film which shows realistic terrors on the people’s faces as the “worlds collide” behind them. When Worlds Collide is a 1951 award-winning, a technicolor sci-fi film from Paramount Pictures. Its story revolves around the coming destruction of Earth by a rogue star. If you’re impressed with this poster, you can purchase a copy of it here. The design of this poster is somehow exaggerated and some people might find it awkward that a female face was applied to the face of the wasp. But what makes it great and stunning is its vivid colors, simple composition, a good tagline, a great title typography, and a wonderful artwork. The Wasp Woman was an American sci-fi horror film back in 1959 and was then released to television two years later. If you like to have a copy of this poster, you can get it here.

Product
Visual
Where to Buy

The Thing from Another World

Creature from the Black Lagoon

Earth vs. the Flying Saucers This is a great poster that features everyday objects which turned into promoters of tension. It certainly made a cat and a scissor look frightening. Its competing diagonals also added up to the poster’s sense of drama. The Incredible Shrinking Man is a sci-fi film from Universal-International and was released in 1957. If you want a wall art of this poster, you can purchase one here. This is a striking poster where the title type is perfectly situated and designed in a style that is very appropriate to the film. All the elements are perfectly layered on the poster, making it look stunning. The cosmic man is an independent sci-fi film which was released in 1959 and distributed by Allied Artists. You can get a decorative poster for this film here.

13. The Thing from Another World This is a poster that only contains the title of the movie but is certainly very eye-catching. The illustrated letters are detailed and look really amazing. Even if we have high-tech computers today, it’s difficult to produce exquisite letters as what this poster shows. The Thing from Another World is a 1951 sci-fi horror film which was released by RKO Pictures. It was based from the 1938 novel, “Who Goes There” by John Campbell. If you also find this poster amazing, you can find a copy of it here.

The poster of the 1979 film, Alien, has a stripped down poster design that is brutally effective. The poster features the film’s tagline, “in space, no one can hear you scream”, which made a lot of people feel scared with what they do not see. Alien was the first film that became a large Alien franchise. You can find a copy of this poster here. This poster shows a man trying to save the plants and animal left on earth in biospheres in outer space. Silent Running is a 1972 sci-fi film that is environmental in theme. It revolved around the thought that in the future, all of the plant life on Earth would become extinct. You can get a copy of this poster here.

16. Creature from the Black Lagoon This 1954 film was about the myth of a half fish-half man and was the first 3D filmed underwater which was projected by the polarized light method. When the viewers watched this movie, they wore gray polarizing filters which are similar to what we use today when we watch 3D films. If you want to get this film’s poster, check it out here. This poster is designed really well and it can surely titillate the viewer. It just shows a part of the killer shrews and it’s like urging you to watch the film to be able to see how the monster looks like in whole. The Killer Shrews is a 1959 black and white sci-fi film which had multiple DVS releases. If you want a copy of this poster, you can purchase one here. This is certainly a beautiful poster which is perfect for the prototypical film that set off the science fiction success in Hollywood. Destination Moon is a 1950 Technicolor sci-fi film which was the very first movie to deal with the dangers of human space travel. It is a great movie, and if you find this poster great as well, you can find a copy of it here. This poster seems like it had scared a lot of kids back then. It’s because it features a woman who looks really scared about the big eye with tentacles. But the design of this poster is unique and it contains great lettering as well. The Crawling Eye or also known as The Trollenberg Terror is a 1958 sci-fi and drama film which was based on a 1956 British TV program called Saturday Serial. If you like a copy of this poster, check it out here.

20. Earth vs. the Flying Saucers This is one of those posters that contains more than one creature or incident but creates a sense of awe and wonder. It has an inventive design, especially on how its title and tagline was creatively placed on the design. This film was also known as Invasion of the Flying Saucers, which is a 1956 sci-fi film from Columbia Pictures. Its storyline was inspired by the book, “Flying Saucers from Outer Space” by Donald Keyhoe. You will be able to find a copy of this poster here.

These are 20 of the wonderful, classic science fiction movie posters. The designers of these posters have really done a great job in illustrating them. Even without high-tech computers and gadgets, they were able to produce good-looking and eye-catching posters. So, which of these classic sci-fi posters would you like to display on your room’s wall?