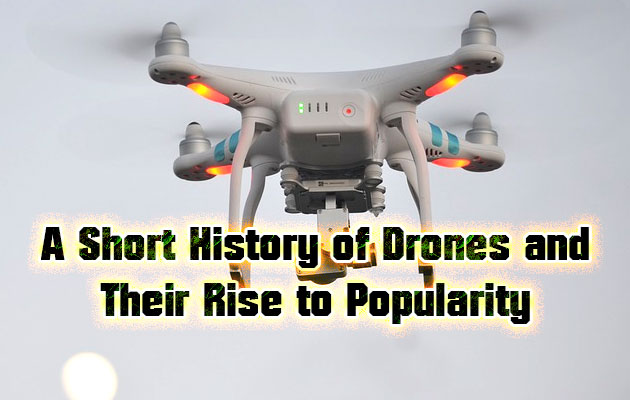 The popularity of drones, or unmanned aerial vehicles (UAV), is on the rise today. A report by the Federal Aviation Administration states that sales of recreational drones are expected to grow from 2.5 million in 2016 to 7 million in 2020. Many people consider drones today as a recreational toy or a flying camera, but it actually started as a tool for military use.

The Austrians were one of the first recorded users of drones. In 1849, they sent 200 unmanned bomb-filled balloons against the city of Venice. The practice of aerial surveillance emerged later in the 1898 Spanish-American War where the US military placed a camera to a kite, producing one of the first aerial reconnaissance images. The earliest efforts to create an unmanned, remotely-guided weapon fitted with explosive warheads was initiated by Captain Archibald M. Low of the Royal Flying Corps in 1916. The following year, the “Aerial Target” was launched, and it did respond to radio control demonstrated by Nikola Tesla’s teleautomaton. In the US, the radio-controlled Hewitt-Sperry Automatic Airplane, or the flying bomb, successfully carried a 300-pound bomb while flying 50 miles after being launched by a catapult in 1917. Innovations for unmanned flying vehicles started in the early 1900s and focused on providing practice targets for military training. The 1930s started the development of the first reusable and recoverable radio-controlled aircraft. The Royal Navy developed the “Queen Bee,” a remote-controlled aircraft developed out of the De Havilland Tiger Moth as a gunnery target. Hundreds of these were built and used for target practice by the Royal Navy during the 1930s to 1940s.

During the World War II, drones were primarily used to deliver ordnance and detonate bombs across more types of remote controlled vehicles emerged – used both to train anti-aircraft gunners and to launch attack missions. The US military and the Germans accelerated the development of unmanned aircraft as they were making more sophisticated missiles. In late 1946, the US Air Force established a special pilotless aircraft branch to develop three types of drones for training targets. The most important among the three was the “Firebees,” which was built by Ryan Aeronautical Company, and was tested in 1951 at the Holloman Air Force Base. The Firebird evolved slowly until it began to be used solely for reconnaissance and intelligence gathering purposes. However, these drones were little more than remote-controlled airplanes until the Vietnam War.

The rise of the electronic battlefield happened during the Vietnam War as it birthed many of the most sophisticated drone surveillance programs in history. During the 1960s, the US Department of Defense started to computerize and automate the battlefield with remote sensors and supercomputers. In 1964, the US Strategic Air Command began flying drones called the “Lightning Bugs” for surveillance across Cold War battlespaces such as North Vietnam, China, and Cuba. These drones contributed to thousands of successful surveillance missions across Southeast Asia. Many aerial views of North Vietnam that appeared in the American press were taken by the drones. As the Vietnam War wound down, the robots were gearing up.

A drone revolution started in the 1970s after a symposium sponsored by the US Air Force and the Rand Corporation, giving birth to remotely piloted vehicles (RPVs). The range and the electronic surveillance capabilities of RPVs were improved. Drones were getting bigger and bigger, and some earlier surveillance drones were upgraded and weaponized. Israel made a huge contribution to the history of drones. In 1973, the Israel Aircraft Industries developed unmanned surveillance machines for battlefield known as the IAI Scout. This was used by the by the Israeli Air Force in a destructive attack on Syria during the Lebanon War.

An IAI engineer Abraham Karem emigrated from Israel to Los Angeles and started to build an aircraft in his garage. Karem developed the Albatross, which gained funding from the Defense Advanced Research Projects Agency. Using the grant money, he developed a drone called Amber under his previous company, Leading Systems Inc. Eventually, Amber was improved by being equipped with GPS navigation, infrared and low-light cameras – the updated version rolled out in 1989 as the GNAT-750.

When the Leading Systems became bankrupt, it was bought by the US defense contractor General Atomics, which continued the development of the GNAT-750. The CIA secretly purchased five GNAT-750s from them.

In 1993, the Pentagon chose the GNAT-750 to be used as a surveillance drone to support United Nations peacekeeping forces in the former Yugoslavia. The GNAT-70 was deployed to a CIA operating base in Albania to provide overhead surveillance for NATO convoys against Bosnian Serb forces. However, the GNAT was vulnerable to inclement weather and its line-of-sight data link had a limited range, meaning it could only be controlled in close proximities.

Because of this, the CIA asked General Atomics to redesign the GNAT-750. They created the Predator, a larger UAV that incorporates satellite communications. They fled it in Afghanistan during 2000 to search for al-Qaeda leader Osama Bin Laden. Recognizing bin Laden’s growing importance to global terrorist operations, the CIA was focused on tracking him down and assassinating him as well as those affiliated with al-Queda. However, after Bill Clinton approved of the launch of 75 tomahawk missiles at Afghanistan, it missed Bin Laden and killed many other militants.

On September 7, 2000, the Predator photographed what it appeared to be Bin Laden. But that time, the Predator was just a surveillance plane. In the aftermath of the 9/11 attack, the CIA immediately launched the targeted killing campaign, wherein a secret list of high-value targets was authorized to be assassinated by the agency without further presidential approval. But since the program was launched, many innocent casualties were killed, and the exact number of fatalities was unknown.

The development of the US drone program became a political process that required a series of legal precedents that enabled the rise of Predator after the 9/11 attack. Today, drones are increasingly being used not just to protect the state from terrorists outside the country, but also against criminals inside. The police forces are making use of these flying robots to provide security in this contemporary urban landscape. The smaller sized drones have made it possible for surveillance to accommodate more intimate places in a way that neither the CCTV or the helicopter could perform.

In the 2010s, the drones for civilian applications started to become popular. The Parrot AR Drone, a smartphone-controlled quadcopter that was introduced to the public in 2010, was claimed to be the original commercial drone that captured the imagination of the US public. By 2015, ordinary citizens had purchased millions of drones, mostly for recreational purposes, pushing the FAA to launch drone registration.  In addition drones for the masses became more popular with options such as fathomdrone.com and others.

Today, these robots have been used for advanced photo and video capture, search and rescue operations, deliveries, emergency response, advanced agriculture and a lot more. The future of drones is truly full of potential and possibilities we may have not yet thought of.

Related Post: A Brief History of the Vacuum Cleaner