Here are some interesting and incredible chemistry facts that will surely boggle your mind! Coca-Cola was first launched as a tonic drink or a stimulant. One of the drink’s key ingredients was cocaine, sourced from the coca leaves. 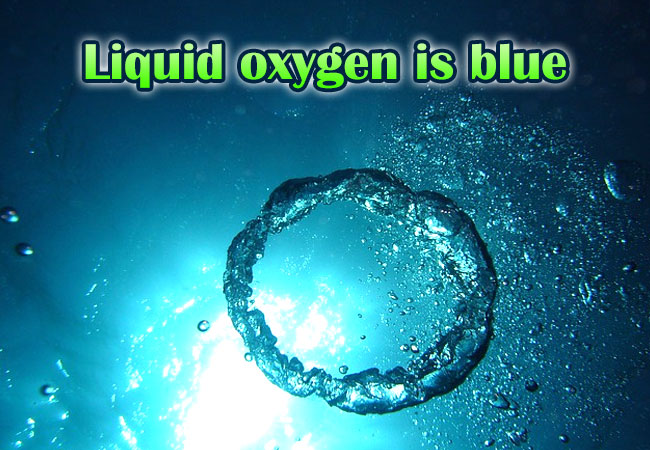 Oxygen, in liquid form, gives off a beautiful pale blue color. This is because when two oxygen molecules smash into each other and are hit by the red light, the unpaired electrons in both molecules will “couple up” in one orbital, thus taking in the proton. The liquid oxygen absorbs the red light which turns into blue. Liquid oxygen is also strongly attracted to magnets (paramagnetic). It seems unbelievable, but the lighter was invented in 1823 by a German chemist named Johann Wolfgang Dobreiner. The match came about three years later! Honey bee sting venom contains peptin mellitin, which is highly acidic. While a wasp sting’s venom is alkaline — when stung by a wasp, the venom can be neutralized by applying something acidic such as vinegar to soothe the pain. Ethylene gas is considered the “fruit-ripening hormone,” which is responsible for changing the texture, color, and softening as the fruit or vegetable ripens. However, not all fruits and vegetables produce ethylene gas as they ripen. Apples, pears, apricots, tomatoes, and bananas are some of the gas-releasing fruit. Fruits like cherries and blueberries don’t produce ethylene and thus is not a big factor in their ripening. Ethylene gas, as a ripening agent, also speeds the decay of some fruits. Our tooth enamel is also the most mineralized chemical in our body and is made up of hydroxyapatite. In the whole universe, hydrogen is the most abundant element, accounting for about 75% of the universe’s mass. It was also the first element that was created after the big bang, because it’s the simplest of all elements, with only one proton and one electron. This means that every hydrogen atom inside your body right now was created with the big bang, almost 14 billion years ago! Afterward, hydrogen atoms fused together to form helium atoms, which in turn formed carbon and so on. About 20% of oxygen in our atmosphere is produced by Amazonian Rainforests. However, about 20% of the forest is also gone, and humankind must conserve the Amazon forest in order to generate more oxygen for Earth. One inch of rain is equal to 10 inches of snow but when the snow is wet or combined with freezing rain or ice at times, the ratio may be lowered to 3-5 inches per one inch of rain. Although oxygen gas is colorless liquid oxygen is pale blue in color. Like liquid oxygen, solid oxygen also gives off a pale blue color because of the absorption in the red portion of the visible light spectrum. It seems unbelievable, but in a bucketful of water, the molecules are over 10,000 times more than pints of water on earth. Aside from helping to determine whether a family relationship exists between two persons or identify the origins of disease, DNA can also kill flames. Italian researchers coated a cotton cloth with DNA derived from a herring’s sperm and found out that the cotton did not burn. The Rarest Element on Our Planet

Astatine is the rarest naturally occurring element on Earth. According to conservative estimates, there are only 28 grams of the element in our planet’s crust. Since it is too scarce to be mined, scientists have to create it in the lab to use for experimentation. But the catch is, only 0.00000005 grams of Astatine has been created in the lab. And technically, it has never been directly observed either because of its short half-life and it’s an unusual rarity.

A diamond is just one big macroscopic molecule. Carbon atoms lock in a crystal lattice to form diamonds, so essentially, a diamond is simply lots of carbon atoms bonded together – a carbon molecule.

Elements starting from helium up to iron are forged in the core of stars, however, elements heavier than iron are produced when these stars die in supernovas.

Centuries before microbes were discovered and the germ theory proposed, ancient civilizations made use of copper for its antibacterial properties. Not only did they use it to prepare medicines, but they also observed that when water was stored or transported in copper vessels, it will not go foul nor will it allow slime build up.

Glass is a Liquid, Sort Of

Interestingly enough, glass is not actually solid. It flows, though at such a slow rate, that we cannot perceive it. Even though it flows like liquids, it is not exactly a liquid either. Scientists put glass in a separate category of materials called, amorphous materials.

Liquid helium flows upwards, defying gravity. Helium liquefies at a temperature very close to absolute zero – the lowest possible temperature in our universe. It then transitions to a state of matter, Bose-Einstein Condensate superfluid. It is the coldest state of matter possible. This state of matter defies gravity by flowing upwards instead of downwards.

Element that Melts in Your Palm

Gallium was first synthesized in a lab, and so far, it has not been found in nature. This silver colored element is mainly used as a stabilizer in nuclear warheads.  Its melting point is considerably low. So low in fact, that when you hold a cube of gallium in your hand, the heat from your palm is enough to melt it. It is commercially available in the market so you can try out this experiment for yourself.

Coffee was once considered a performance-enhancing drug. This led to a coffee ban in the Olympics which was only lifted when it was discovered that if you consume coffee, it actually drops your performance to an average.

Honey never goes bad. Thanks to its abnormally high sugar levels, it only crystallizes when left unattended for longer periods of time. Since it doesn’t spoil, many civilizations have used it for preservation purposes

As opposed to other substances, when you freeze liquid water into ice, it increases in volume by 9%. Due to hydrogen bonding – the weak attraction between molecules of certain hydrogen-containing compounds – water molecules rearrange themselves in a lattice structure, with significant gaps in between. This leads to expansion when water transitions to a solid state.

Sun Will Swallow Mercury and Venus

You might have heard that 12 billion years from now, our sun will have consumed all its hydrogen and will turn into a red giant and will eventually swallow our planet. But before that happens, 5 billion years into the future, Mercury and Venus will be swallowed by our Sun.