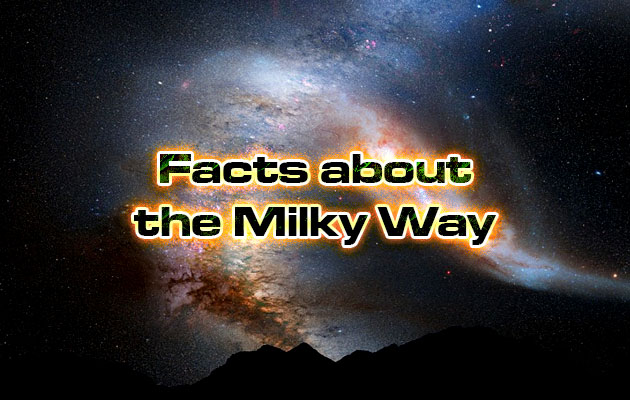 For so many centuries, scientists and philosophers were baffled with our home planet and galaxy. The Milky Way galaxy is our galactic home, encompasses the Earth, our solar system and billions of other planets and stars. Here are some of the fun facts about the Milky Way galaxy. The name “milky way” was derived from the way it looks. In Latin, our galaxy is called “via lactea” which literally meant a “milky way” or “milky road.” The word “galaxy” is derived from a Greek word for “milk.” In Greek mythology, the Milky Way was created when Hera spilled her milk while suckling Heracles. There is no absolute proof why ancient people named our galaxy as something related to milk, but some scientists believe it is just because of its appearance as a dim milky band against the night sky. In terms of structure, the Milky Way is a barred spiral galaxy – a galaxy that has curved arms that spin out from the middle and has a bar of stars across its center. It was discovered that our galaxy is barred, rather than an ordinary spiral galaxy, during the 1990s. According to astronomers, two-thirds of the galaxies in the known universe are spirals, making Milky Way one of the most common types of galaxies. The Milky Way has four spiral arms in which the stars in the disk of the galaxy is organized. These spiral arms are the Perseus arm and Carina-Sagittarius arm, Scutum-Centaurus arm, and Norma and Outer Arm. Our solar system is perched in the center of what was considered as a branch of the Perseus arm: Orion’s arm. The Orion’s arm was once considered as a spur or a minor protrusion between the Perseus Arm and Carina-Sagittarius arm. The spiral disk of the galaxy is not flat though, as it is warped in shape. This is attributed by astronomers to its small galaxy neighbors orbiting it: the Large and the Small Magellanic clouds. The Milky Way galaxy is consuming these two nearby dwarf galaxies, pulling on the dark matter from them. From humans’ point of view using the naked eye, the Milky Way seems to be composed of about 2,500 stars. However, the galaxy may contain up to 400 billion stars, including our Sun. With this number, we’re not likely to run out of stars until the distant future. The largest galaxy astronomers have discovered, which is named IC 1101, has more than 100 trillion stars, and other large galaxies can have as many as a trillion.

Astronomers estimate that seven new stars are being formed in the Milky Way galaxy every year. They form inside huge clouds of gas and dust, which are raw materials from dead stars that collect molecular clouds. About twice a century, we lose a large star as it explodes into a supernova. Theories about stellar formation seem to indicate that most stars will have planets. It is estimated that the Milky Way has about the same number of planets as well (400 billion). It’s actually difficult to detect because they don’t shed their own light. Meanwhile, each sun and planets will have a “Goldilocks zone,” a habitable place for life where it is not too cold or too hot – just right. Recent studies show that there might be around 11 billion to 40 billion planets that can possibly support life just like Earth. These planets could have liquid water, even if it’s a solid planet that has liquid water or a gas giant with water in the atmosphere. Due to the vastness of our galaxy, our nearest star system, Alpha Centauri is 25.6 trillion miles (4.3 light years) away. I repeat that’s the nearest one! Tucked in the heart of the galaxy is a supermassive black hole, which is billions of times as large as our sun. This black hole center is called Sagittarius A*, a massive source of intense radio waves that can consume anything that happens to be nearby. The Earth is 26,000 light years away from it. The black hole is measured 14 million miles across, which is about the size of Mercury’s orbit. All mass trying to get into the black hole forms an accreditation disk that has 4.6 million times the mass of the sun and about the size of the Earth’s orbit.

Because spiral galaxies are common in the universe, the Milky Way galaxy is not rare. However, astronomers discovered a galaxy that is very much similar with our own in 2012 – the NGC 1073. This galaxy is another barred spiral and has a supermassive black hole center. It also has two small galaxies orbiting it, perfectly corresponding to our Magellanic clouds.

12. Almost as old as the universe

Our galaxy, plus 40 other galaxies nearby make up a cluster called by scientists as the Local Group. The Local Group belongs to a larger cluster of galaxies called the Virgo Supercluster, which has at least 100 galaxy groups and clusters located within it and is about 100 million light years in diameter. Recent studies found that the supercluster is only a lobe of a greater supercluster named Laniakea.

The Milky Way, just like everything else in the universe, is moving through space. While the Earth moves around the sun, the sun moves around the Milky Way, and the Milky Way moves as part of the Local Group, which moves relative to the cosmic microwave background (CMB) radiation, which is left from the Big Bang explosion. The CMB is a convenient reference point to use when defining the velocity of objects in the universe. Relative to it, our Local Group is moving at a speed of about 600 kilometers per second.

Four billion years from now, the Milky Way galaxy will collide to its nearest neighbor, the Andromeda Galaxy. Both galaxies are rushing towards each other at a speed of about 140 kilometers per second. The good news is that the sun and the Earth may not be greatly affected, and the two galaxies could only pass right through each other because the distance between stars is so huge despite having billions of them. Once the collision is over, the Milky Way and the Andromeda will no longer be two spiral galaxies but an elliptical one.