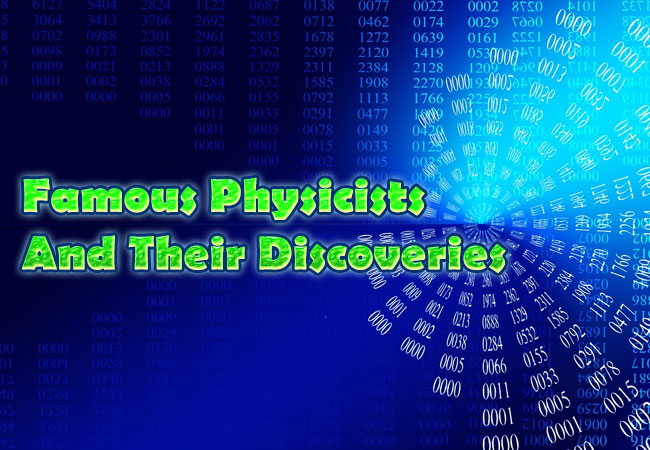 In this gallery we pay tribute to the famous physicists and their discoveries that not only changed the face of science but also, in so many ways, life as well. Their discoveries and contributions have provided us a better understanding and appreciation of the world in which we live. Austrian physicist Erwin Schrodinger is renowned for his explanation of what is known today as wave mechanics. His most famous contribution to physics is the Schrodinger equation which depicts how the state of a physical system reacts with relation to time. Schrodinger won a Nobel prize for Physics in 1933. English physicist Joseph John “J.J.” Thomson is known for his recognition of the electrons and isotopes. While doing one of his experiments, Thomson discovered a negative charged particle which he identified as the electron. You probably know that the word “volt,” an electric unit, is named after the 18th-century Italian physicist Alessandro Volta. He is also credited for developing the world’s first electric battery that consisted of copper and zinc along with sulfuric acid. German physicist Max Planck is dubbed as the “father of quantum theory” for his work in the field that broadened the understanding of space and time. British physicist Ernest Rutherford is dubbed the “father of nuclear physics.” Alongside another renowned physicist, J.J. Thomson, Rutherford conducted experiments that eventually led to the discovery of the electron. Electricity is something that we may take for granted nowadays, so we guess you should take time to thank the English physicist Michael Faraday for being one of those people who brought it. Much of his work was focused on magnetism and electricity, and they were considered as being quite groundbreaking. A lot of scientific concepts were named after him, such as the Faraday’s laws of electrolysis. English polymath, architect, and philosopher Robert Hooke is known for his law of elasticity, aka Hooke’s Law, which features the relationship between load or forces applied to a spring and its elasticity. He also developed one of the earliest-known reflective telescopes. Many of us know about the Polish-French scientist Marie Curie and her groundbreaking work in the field of radioactivity. Among her contributions are the creation of the theory of radioactivity, introducing techniques in this field by isolating isotopes, and the discovery of elements radium and polonium. Galileo Galilei is known for invention of the telescope, as well as for his theories in the field of moving bodies. His work in many branches of science — including physics, mathematics and astronomy — became instrumental in the expansion of our understanding on the role of the universe around us. Serbian-American engineer, physicist and inventor Nikola Tesla’s greatest contribution to science was his development and design of the alternating current (AC) system. He also worked for Thomas Edison in New York City for a time. Tesla’s experiments on high voltage garnered him greater renown. Isaac Newton may have made several scientific laws or theories, but he is most identified with his most famous Law of Gravity. He also recognized for the theory of mechanics. Hawking gained renown for his collaboration with Roger Penrose on gravitational singularity theorems, which resulted in the theory for the basis of general relativity. He is also known for his theory quantum mechanics and theoretical prediction that black holes emit radiation, which came to be known as Hawking radiation. In 1905, German physicist Albert Einstein published a paper titled On the Electrodynamics of Moving Bodies, which contained his now-famous theory of relativity. For his groundbreaking contribution to theoretical physics, he received the Nobel Prize in Physics in 1921. Danish physicist Niels Bohr contributed to the field of physics through his study and interpretation of the atomic structure as well as his help in the understanding of quantum theory. His work helped him receive the Nobel Prize in the field of physics in 1922. His studies led him to establish the Institute of Theoretical Physics (now Niels Bohr Institute) in Copenhagen.