The Bajau people (or Sama-Bajau people) are an ethnic group of Maritime Southeast Asia. The population of the Sama-Bajau people are mostly concentrated in the southern Philippines, in Sabah in Malaysia, in North Kalimantan and Sulawesi in Indonesia as well as in Brunei. They have been mostly nomadic, seafaring people, and obviously their livelihood largely depends on the sea. That’s why they are sometimes called “sea gypsies” or “sea nomads.” This woman from Maiga Island in the district and town of Semporna, Malaysia. Her face is covered with burak or borak, a sun-protecting powder made of water weeds, rice and a variety of spices. Sulawesi is an island of Indonesia, located between Borneo and Maluki Islands. It is the eleventh biggest island in the world and one of the Greater Sunda Islands. The island has population of over 18 million people and has nine ethnic groups, including the Bajau people who mostly live on the shores. Its former name is Celebes, given by Portuguese explorers. Many of the Sama-Bajau people of today still live like their ancestors did. As they lead a nomadic and sedentary lifestyle, they live in houseboats which usually accommodate a single nuclear family (mostly five members). These houseboats sail together in flotillas (fleets) with other houseboats, usually of their immediate families or closest relatives. They come together whether they hunt for fish or to conduct traditional ceremonies. 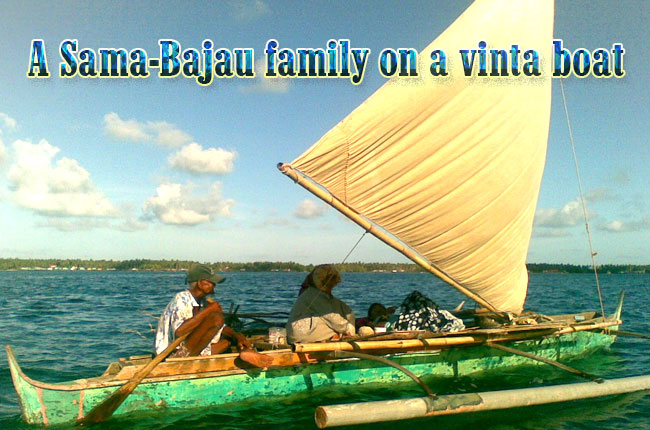 The vinta is a traditional boat found on the coast of the southernmost Mindanao region in the southern Philippines. Locals also call them lepa-lepa or sakayan. A vinta has a single sail with vertical designs and is quite colorful — these designs reflect the colorful culture of the Filipino Muslims. Omadal Island (“Pulau Omadal”) is located in the Malaysian state of Sabah. Other Bajau sea gypsies live in houses, like those in Palau Omadal, that stand on stilts over the lapping waves. The Sama-Bajau’s Regatta Lepa Festival in Semporna, Sabah, Malaysia pays homage to the lepa — which are quite similar to the Philippine vinta — boats with one mast having colorful designs. The festival is usually held in April every year. The Sama-Bajau women have their own roles in their community especially in farm work. While the men are involved in smithing, building boats and trading among the islands, the women are usually engaged in weaving as well as making and selling pottery. For the exception of all-nomadic groups, the fishing is purely done by the men, while their wives and children engage in inshore gathering. They aren’t called “sea gypsies” for nothing. For the Sama-Bajau people, the water is their oyster (pardon the pun). So it’s not surprising that they seem to have inborn swimming and diving skills. Even children are already a natural in the water — and they use their free diving skills as a way of underwater fishing. Here in this picture a Bajau (Badjao) child in Tagbilaran, Bohol in the Visayas region in the Philippines, diving for coins thrown into the water by tourists. The Sama-Bajau children live their whole lives on and in the ocean. For them, the sea is their home and heaven. They learn to dive at an early age. For these young kids, not only do they have expert-level swimming and diving skills, but they also have excellent and clear underwater vision. Some of them have learned to fish using a harpoon. “Sea gypsies” or “sea nomads” have also been used for other ethnic groups other than Sama-Bajau, with similar lifestyles (like the Thai-Burmese Moken people, as well as the Orang Laut of Malaysia, Singapore and Indonesia’s Riau Islands). Some Sama-Bajau people in Sabah revolve their everyday lives around raising and herding horses. The Sama-Bajau women hand-make traditional mats from their homes. It is a long and meticulous process, and this is the skill that the women pass on from generation to generation. However, the elderly women in particular are now facing waves of change — they worry for the future of traditional weaving as many younger Sama-Bajau women are no longer interested in learning the skill.

Aside from weaving, the women also make and market pottery.