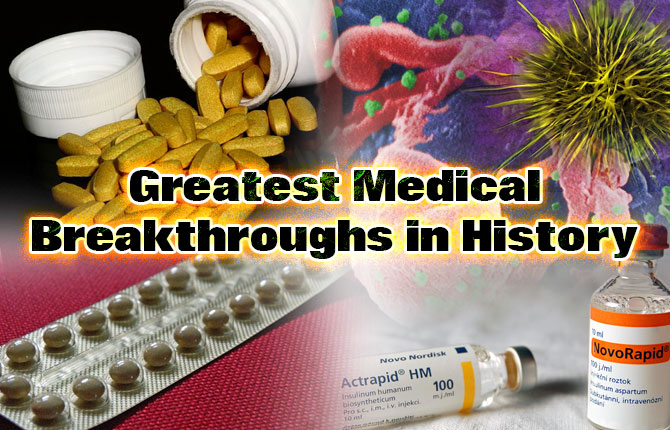 There are a lot of medical discoveries, but there are a few that will always be considered the milestones of medical history. Check them out! The most familiar medical breakthrough is the discovery of penicillin by Alexander Fleming in 1928. And why is it so familiar? Probably because it’s something that most of us learned in school. Fleming’s almost-accidental discovery of a bacteria-fighting mold led him to the development of an antibiotic that we use today against infections from bacteria and viruses. Penicillin is a major turning point in medical history because it would go on to save millions of lives. Before, a simple infection could lead to more serious complications or worse medical consequences such as amputation. Smallpox had been killing millions of people throughout many centuries, since the white colonists brought the disease to more remote regions and passed it on to the natives.

The last known case of smallpox was in 1977, and by the 1980s the World Health Organization declared that the disease had been totally and successfully eradicated, thanks to the discovery of this vaccination. Swiss physician Friedrich Miescher is credited as the first person to discover DNA. However, it was scientists Francis Crick and James Watson who discovered the double-helix model. Their discovery led them to jointly win the Nobel Prize.

So why is the discovery of DNA important? It’s because it is the code of life, not just of humans, but of every living organism. A code that the every cell can read, including all the data that govern the physical features about us, from eye color to congenital disease. It has not only revolutionized the fields of science and medicine, but also plays an important part in forensics, law and crime, inheritance and other fields. French scientist Louis Pasteur’s name has been often linked to germ theory. His discovery led to the better understanding of some diseases which, in turn, contributed to the improvement of sanitation and hygiene practices. The discovery of anesthesia during the 19th century is one of the most critical medical breakthroughs as it benefits the patients while being operated. It helps numb the sensations which saves the patients from making disturbing screams of pain while having his leg amputated or being disemboweled. Before, patients were made to bite on a wood or a rope to stop them from screaming while under surgery (we know, you’re shuddering right now as you read this!).

The first anesthetics included cocaine and chloroform. They were effective in numbing the sensations but they proved to be either addictive or life-threatening. Fortunately, present-day anesthetics are safe and effective. Insulin is the hormone that saves the lives of millions of diabetics all over the world. Before its breakthrough discovery, diabetes was a condition that put patients to a slow and nasty death. While insulin isn’t guaranteed to cure diabetes (as the disease is still incurable) at least it allows patients to live normally as well as control the sugar in their blood. Nowadays we take X-rays for granted. But if not for its discovery, repairing injuries as well as determining the cause of several diseases would have been a matter of guesswork today. This technique, now widely used in hospitals and clinics, was discovered purely by accident when inventor Wilhem Conrad Röntgen used it create a picture of his wife’s hand. The remarkable drop in birth rates during the late 19th and early 20th centuries was attributed not only to better sex education and reproduction, but also to better contraception methods.

One of the pioneers of birth control in the United States was anarchist/political activist Emma Goldman who set out to educate and encourage other women to try contraception in order to control unwanted pregnancies. The campaign was successful and led to the formal establishment of Planned Parenthood Federation of America that emphasizes birth control as well as reproductive health not just in the US but also in many parts of the world. A new retrovirus caused a peculiar disease — now known as AIDS — that affected and killed patients which initially consisted of mostly gay men and drug users. It led to its discovery by Robert Gallo and Luc Montgnier in 1980, and was identified as human immunodeficiency virus (HIV). This important discovery led to the greater awareness of HIV/AIDS, in particular about unprotected sex, use of unsterilized needles as well as other ways that it can be transmitted. In addition, the discovery also led to AIDS prevention and different treatments that at least help HIV/AIDS-affected patients manage their condition and lead normal lives as possible. The discovery of vitamins by several scientists, most notably by English biochemist Frederick Gowland Hopkins and Polish chemist Casimir Funk, led to a greater understanding and appreciation of nutrients. These discoveries also helped to address its deficiencies that contribute to several certain illnesses and conditions.