There are hundreds (if not thousands) of poisonous plants and a lot of them are deadly. Having some knowledge about these plants are beneficial so that you could avoid eating them or touching them, or even just getting accidentally brushed with them. The name of this family of plants says it all — both the foliage and its shiny black berries are both toxic and containing tropane alkaloids. It has been notorious for centuries as a poison, but do you know that the deadly nightshade is also related to the common crops like tomatoes, potatoes, eggplants, chili peppers and tobacco? They all belong to the family Solanaceae.

Humans and cattle should avoid eating the both the lethal foliage and berries. Even coming in contact with its leaves can produce skin irritation. The plant is also called belladonna. Apart from its most well-known name, the rosary pea is anything but pious. The plant has bright red and black berries covered with a hard, plastic-like shell. The berries are made into jewelry — hence its name, due to their traditional use as rosary beads. This is actually a bad idea, as the seeds contain toxins called abrin. Many people have reportedly died after accidentally pricking a finger while making jewelry with these seeds. The much safer use of these seeds goes toward the making of percussion instruments. Oleander is widely grown in many parts of the world as an ornamental plant for its showy pink flowers. Which is rather bizarre, as the plant contains cardiac glycosides known as olendrin and neriine. If the flowers and foliage are ingested in consistent doses, it will cause a cardiac arrest. The therapeutic claims of oleander have been proved to be false. Native to eastern and central North America, the white snakeroot is an innocuous-looking plant with clusters of small white flowers. But don’t let the looks fool you! The white snakeroot has a toxin called tremetol, which causes ‘milk sickness’ in humans. When cattle has grazed on this plant, their meat and bones have become contaminated with tremetol. When contaminated milk or meat is consumed by humans, the poison is passed into the body and causes milk sickness. It is characterized by trembling, vomiting and extreme pain in the intestines, abnormal acidity in the blood and death. It is believed that Abraham Lincoln’s mother died from ingesting a snakeroot-contaminated milk.

Fortunately, because of the advancements in farming as well as growing awareness of the life-threatening effects of the white snakeroot, few people have been sick caused by this plant. The commercial castor oil is derived from the castor oil plant, and has been used for many purposes from food to soaps to paints and dyes and plastics. But the seeds, which the oil is derived from, naturally contain the poison called ricin. This highly toxic and water-soluble substance can cause death in small doses. Even ingesting one or two seeds can kill a child and up to eight seeds can put up to eight full-grown adults to death.

Ingestion of the seeds cause the following: burning sensations in the mouth, vomiting, diarrhea, seizures, intense pain in the intestines, and death. This tree should be avoided at all costs. Manchineel could be the most dangerous and deadliest tree on earth and there’s no way that you could even go near it.

It’s because all parts of the trees contain toxins — yes, each and every part of the tree. Manchineel produces a milky white sap which contains phorbol and other skin irritants. A mere accidental brushing against the tree will cause a violent allergic reaction to the skin. Even standing under the tree during a rainfall will cause the skin to blister, because of the raindrops that carry the milky substance.

Even burning the tree will not spare you from trouble — the smoke will cause severe irritations in the eye.

Now, let’s go to the fruit — the manchineel fruit is sometimes called the “little apple of death” because it is highly poisonous and it can be fatal if eaten. 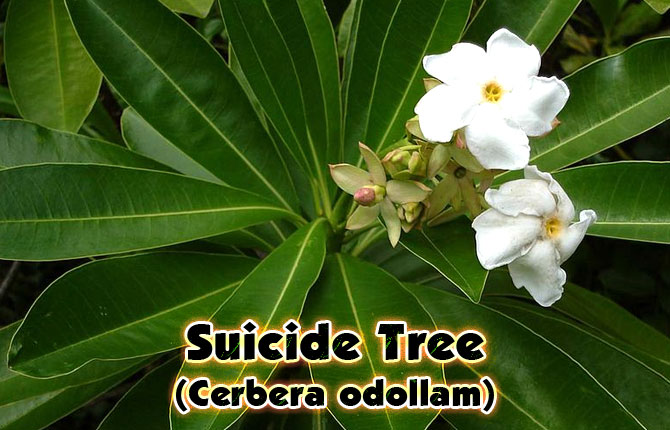 This suicide tree is native to southern Asia. It is somewhat similar to mango, from the leaves to the fruits especially when green. The fruits’ seeds contain cerberin, a toxin that hinders the calcium ion channels in the heart’s muscles. Ingesting these seeds will lead to irregular heartbeat; large quantities can inevitably lead to death.

Cerberin can be masked with strong spices when incorporated in several dishes, which makes the suicide tree a favorite weapon for suicide and homicide especially in India. This toxin is also difficult to detect when doing autopsies, so it is often overlooked as a cause of death. Another highly poisonous plant is the water hemlock, one of the most poisonous plants in the New World. It contains powerful toxins called cicutoxin. When the parts of the plant are ingested, the cicutoxin overstimulates the central nervous system which leads to seizures, nausea, kidney failure, irregular heartbeat, tremors, abdominal pains and death. Native to South America, angel’s trumpets are known for their large, fragrant, pendulous flowers which are shaped like a bell or a trumpet. Like many ornamental plants, all parts of angel’s trumpets are poisonous. Ingesting any of these parts can cause diarrhea, nausea, paralysis and disturbing hallucinations. It can be fatal when consumed in large quantities. Also known as monkshood or Queen of all Poisons among other names, the wolf’s bane is an extremely toxic plant as almost all of its parts contain toxins called alkaloid. Ancient Greek hunters used the toxins to tip their darts for killing wolves, hence its name. The Chinese also used wolf’s bane for hunting.

Ingestion of the parts of the plant will result into burning sensation or numbness in the mouth, burning of the abdomen, sweating, dizziness, difficulty in breathing, confusion, headache, extremely low blood pressure (hypotension), and death.