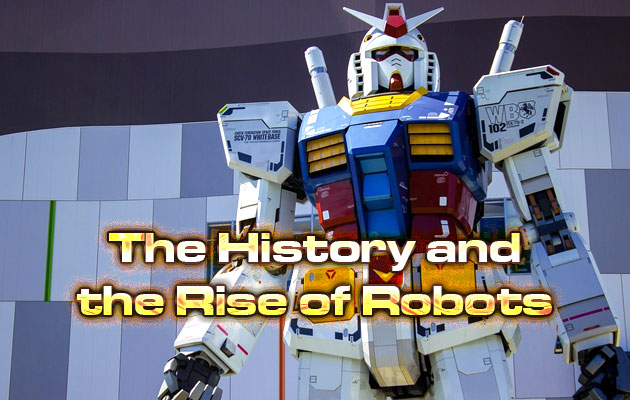 When we hear the word “robot,” we might have imagined different images in our brains. Some of us might think of the popular sci-fi movies like Transformers and Star Wars. Some might remember Rosie the cooking and cleaning Robot of the cartoon series The Jetsons, while others picture out the Japanese robot Asimo or the Sojourner rover, the Martian explorer. While the science of robotics has only existed in the 20th century, the idea of robots has origins dating as far back as the ancient Greece, Babylonians and in early Chinese dynasties. The ancient Babylonians have developed the clepsydra, which is considered one of the first robotic devices in history. Clepsydra is a clock that measures time using the flow of water, which design was refined for centuries. Sometime around 270 BC, the Greek inventor Csestibus utilized animated human figures for the water clock.

In ancient Greece, myths about Hephaestus, the god of fire, tells that he created robots to assist in his workshop. He formed a three-legged table that could move about under their own power and a bronze man who defended Crete. Meanwhile, the Greek engineer Hero of Alexandria produced two texts Pneumatica and Automata, that attested the existence of hundreds of machines that automated movement. These devices are called automaton, coming from a Greek word which means “acting of one’s own will.”

In 400 BC, the Greek mathematician and friend of Plato, Archytus of Tarentum, invented the pulley and screw, as well as a wooden pigeon operated by mechanical steam.

During 200-300 BC in the ancient Han dynasty, accounts tell of a mechanical orchestra built by Chinese craftsmen. Similar automatons had proliferated over China during the Sui dynasty era (580-681 AD). An account on automata was found in the Lie Zie text, which was written in the 3rd century BC. According to the text, King Mu of Zhou was presented with a life-size, human-shaped mechanical figure by an artificer named Yan Shie.

In the Middle Ages, automatons were popular as part of clocks, entertainment and religious worship in both the Middle East and Europe. In 1206, an Arab inventor named Al-Jazari left manuscripts describing and illustrating various mechanical devices like a large elephant clock that sounded the hour, a waitress automaton that served drinks, and a musical robot band placed in a boat to entertain royal guests during parties. An automaton monk extant that kissed the cross in its hands was created in Europe. From the rediscovered pages from Leonardo da Vinci’s manuscripts in 1950, it was found that he had designed one of the earliest robotic visions. In 1495, da Vinci sketched the “Mechanical Knight,” a plan that used the Vitruvian Man’s proportions and substituted pulleys and cables for bones and muscles. The robot, which appeared to be a knight dressed in German-Italian medieval armor, could perform human-like motions like twisting head and neck, sitting up, and moving arms. There was no evidence that the robot was ever built, but the design may create the first humanoid robot. The rise of “automaton”

During the 1700s, most automata built were capable of flying, acting, drawing and playing music. One of the most famous creator that time was French inventor, Jacques de Vaucanson. He created the “Digesting Duck” in 1737, a clockwork duck capable of flapping wings, quacking, eating and digesting food, and even defecating by excreting matter stored in a hidden compartment. More than 400 parts were assembled in each of the wings alone. The following year, he designed and built the amazing flute playing automaton, which had lots of audiences in Paris lining up to see it.

In 1810, the first humanoid robot was created. It was a soldier with a trumpet made by German inventor Friedrich Kaufmann.

The Industrial Revolution and the increased focus on engineering, mathematics, and science in England during the Victorian age added to the efforts towards actual robotics. Charles Babbage developed the foundations of computer science in the early 19th century. Although his projects, the difference, and the analytical engine, were never completed due to lack of funding, these machines laid out the foundations for mechanical calculations.

Automatons continued to provide entertainment during the rest of the 19th century, but along with this period was the development of engines that helped make manufacturing quicker and more efficient. Factories began to utilize machines to either increase precision or load in the production of products. The origins of robots and robotics

However, the scientific progress made in the 20th century in the field of robotics surpassed all the past inventions and discoveries.

The term “robot” was first used in a play of Czech writer Karel Capek, the R.U.R. (Rossum’s Universal Robots), which was translated and performed in New York City in 1922. It was taken from the Czech word “robota,” which means “drudging, forced labor.” The play ended with robots taking over the planet and destroying their creators. Eventually, this play replaced the use of the word “automaton” with “robot.”

Many robots were created before the age of computer-controlled mechanisms for sci-fi films. These were machines that could perform few stunts like the automatons of the 18th century. In 1928, W.H. Richards invented a humanoid robot named Eric, which could move its hands and head and could be controlled using remote or voice control.

By the late 1930s, the Westinghouse Electric Corporation designed and built another humanoid robot, named Elektro, that could walk by voice command and speak about 700 words using a 78-rpm record player. It measured seven feet tall and weighed 265 pounds and it consisted of a motor skeleton and steel gear cam. Elektro could also smoke cigarettes, blow up balloons, move his head and arms, and distinguish between red and green light. It was exhibited at the 1939 World Fair, and by the next year, Elektro was joined by Sparko, the robot dog that could bark, sit and beg.

The word “robotics” was also invented by a writer. Russian-born American science fiction writer Isaac Asimov first used the term in 1941 his short story “Runabout.” Asimov also formulated the Three Laws of Robotics in the story. He had a more optimistic opinion of robots than Capek, as he viewed it as a better, cleaner race and helpful servants of mankind.

The history of robots is linked to the development of artificial intelligence. The first digitally operated and programmable robot was created by George Devol in 1954. It was called “Unimate” – a robotic arm device that transported die castings for General Motors’ automotive assembly line. Devol then formed the world’s first robotics company, Unimation, with entrepreneur Joseph Engelberger in 1956. During the late 1960s, Engleberger acquired Devol’s patent for the robotic arm and was able to modify it into an industrial robot. Due to his successes, Engleberger is known as the “Father of Robotics.” The academy has also made much progress in creating new robots. In 1966, the Artificial Intelligence Center at the Stanford Research Center began developing “Shakey,” the first mobile robot that combined logical reasoning and physical action. It was also the first robot able to reason about its own actions, move around the room, observe its environment with his television “eyes,” and provide a limited response to his environment.

Up to the 1970s, the term artificial intelligence (AI) was relatively new. Humanoid robots, which was later called android robots, were designed to absorb every detail in their environment and carry out mathematical calculations to analyze what they see. Japanese robotics started leading the field in the 1970s, as Waseda University completed the world’s first full-scale humanoid intelligent robot named WABOT-1 in 1972. The robot could perform a number of abilities such as walking, gripping and transporting objects with its “hands,” measuring distances and directions to objects and using tactile sensors and communicate with humans in Japanese with its “mouth.” There were many other attempts to create humanoid robots, but most of their creations were paralyzed after moving forward for just a little distance, overwhelmed with all the new information they received.

The 1980s and 1990s ushered in a turning point in the study of artificial intelligence. It was proposed that a robot didn’t need a highly accurate internal analysis and representation of the world to interact with it. This new perspective revolutionized the study of AI and robotics.

Robots became highly useful in the field of astronomy. In 1997, the tiny Sojourner Rover was launched for a scientific mission on Mars. It was only expected to operate for seven days, but the rover shut down after days of operation. This small robot performed semi-automatic operations on the surface of Mars, moving at a maximum speed of 0.02 miles per hour and taking 550 photographs. The Sojourner’s ability to navigate with little data about its environment and surroundings allowed the robot to react with unplanned events, objects, and obstacles.

Robonaut, a humanoid robot operated from a laboratory at NASA’s Johnson Space Center, was designed to assist spacemen. Built in 2000, it had hands that could manipulate space tools and work in similar environments like suited astronauts. Robots of the new millennium

In 2000, Honda unveiled its most advanced project, the 51-inch humanoid robot ASIMO. With a name that stands for Advanced Step in Innovative Mobility, ASIMO is capable of walking, running, communicating with humans, interaction with an environment, as well as facial and environmental recognition and voice and posture recognition. It was one of the most famous robots because of its near-human pace.

A robotic vacuum cleaner named Roomba was first released in 2002 by the robotics company iRobot. With over 6 million units sold, the device went on to become the most commercially successful domestic robot in history.

In 2012, the final mission of the Space Shuttle Discovery delivered the first humanoid robot in space to the International Space Station. It was the R2, or the Robonaut 2, a robot with a near-human range of motion and can perform tasks that are too dangerous for human astronauts.

The self-driven vehicle also got licensed in 2012. The Nevada Department of Motor Vehicles issued a license to a driverless Toyota Prius modified with Google GOOG technology. By November that year, Google’s driverless cars had logged more than 300,000 miles in traffic and had never caused even a single accident.

Over time, robots have found a place in many spheres as well, like military, toys, and entertainment, search and rescue operations and other jobs. In 2015, the Tartan Rescue team designed their own CHIMP robot for DARPA Robotics challenge, which encouraged the creation of new types of robots to assist in search and rescue during man-made and natural disasters. The five-foot-tall, 407-pound humanoid robot fell during a door-opening task but proved its resilience by regaining its feet. It was the only robot from the many that fell during the competition that was able to get back on its feet without any assistance or control.

Robots that can produce its own “children” are also being built. In 2012, researchers at Cambridge University designed the “Mother Robot,” which generates up to 500 new robots and tests their performance without human intervention. Researchers suggest that these machines can be used in an automotive plant, where robot cameras scrutinize each unit in the assembly line, check any mistakes and then design a better one.

Indeed, the technology of robotics has vastly improved. Many robots find their way into many tasks in the past that have been too dull or dangerous for humans to achieve. From water clocks and wooden pigeons to humanoids and androids in space, the history of robots has been a long series of big leaps for mankind.