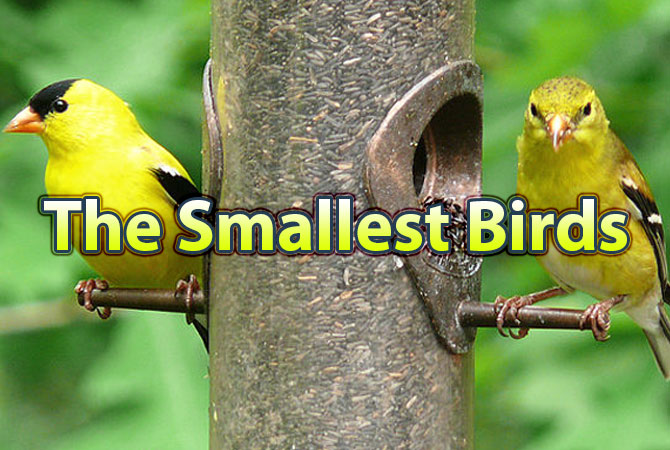 Like many other living things, birds range in size. There are the world’s biggest birds like the ostrich and smallest ones like the hummingbird. But do you know that there are other small birds out there too? Most of these small birds belong to the order Passeriformes (or “perching birds” or “passerines”) whose distinct toe formation enables them to perch on the branches. Their diminutive size makes our feathered friends more adorable. Click our gallery to find the smallest birds on the planet. The Tropical Parula is one of the smallest birds. Its approximate height is 11 centimeters in length and weight is about 3 grams! Also formerly called olive-back warbler, the Tropical Parula live chiefly in oak woodlands, where these birds build their nests. The Verdin is a species of the Penduline tit, and measures 11 centimeter long. It has mostly gray feathers, with adults having a bright yellow head and a reddish-brown “shoulder patch.” Its bill is sharp and pointed, unlike other tits. The Verdin is second only to the American Bushtit as the smallest of the passerines on the American continent. They forage on insects as well as occasionally attempt to snag some small dried sugar water (or “nectar”) left on hummingbird feeders. The Weebill gets its name from its small bill, thus the “wee bill.” It is the smallest bird in Australia, measuring about 8 to 9 centimeters long. It flies in small flocks and resides in the forest or any other wooded region although they love eucalyptus trees in particular. Another passerine bird, the Willow tit has a preference for cold weather despite its diminutive size. Its maximum length reaches about 11.5 centimeters, weight reaches up to .38 ounces, and wingspan ranges from 60 to 70 millimeters. The Willow tit is almost similar to the Marsh tit, except the way these two birds chirp. Also known as the Eastern Goldfinch, this bright yellow bird is native to North America and belongs to the Finch family. It measures 11 centimeters long, and weighs 11 grams. The American Goldfinch is one of the longest-living small birds, thanks to its all-plant diet. It molts its feathers twice a year, and is also migratory. This bird feeds chiefly on nectar (and occasionally small insects and fruit juices), thanks to its long, slender bill that enables it to obtain nectar from the flowers. It can also dine on hummingbird feeders. It sometimes makes its way into houses and would “steal” sugar, therefore earning its other name “sugar bird.” It measures 10 to 13 centimeters and weighs up to 19 grams. It is also known as Zunzuncito and Helena Hummingbird. The Bee Hummingbird is the world’s smallest living bird, measuring 5 to 6 centimeters and weighing 1.6 to 2 grams. In other words, it is slightly bigger than a bee (hence the name), and less the weight of a penny. It is native to Cuba, although it can also be rarely seen in neighboring islands. Another passerine bird, the Brown Gerygone (formerly known as the Brown Warbler) is native to the eastern Australian coasts as well as in some areas of Southeast Asia. It measures up to 11 centimeters long and weighs up to six grams. The name “Gerygone” means “born of song.” Another species of hummingbird, the Costa’s Hummingbird is also one of the world’s smallest birds, measuring only 7.6 to 8.9 centimeters long and weigh less than 4 grams. Native to the southwestern region in North America, this bird thrives well in the deserts. The male has brilliant purple plumage on its head, while the female is more drab-looking. This little bird is also native to Australia. The name is derived from the male’s bright red plumage across much of his body and head, brown wings, and a white throat. Like many other birds, the males are usually more brightly colored than the females. The bird’s length is 10 to 12 centimeters, and weight is 10 to 11 grams. The Lesser Goldfinch is a small songbird found in the New World, and belongs to the Finch family like its relative the American Goldfinch. It length is 10 to 11 centimeters, weight is about 9.5 grams, and its wingspan is approximately 21-25 centimeters. This gorgeous small bird is another passerine belonging to the Finch family. Both male and female have brown and blue plumage, but only the male has a red patch on his cheek, which makes him look like he has a permanent blush (Mother Nature’s make-up, ostensibly to attract females). It measures only 12.5 to 13 centimeters long, and weighs less than an ounce. This small passerine is another Australian small bird. Among the other birds on this list, the spotted pardalote has the most striking plumage with awesome colors and patterns, hence the name. Like most Aussie birds, its favorite hangout is the eucalyptus trees. It measures 7.8 to 9.9 inches long. Although numbers have been declining due to urbanization, these birds are not yet considered endangered at this time. The Goldcrest has an interesting scientific name, Regulus regulus, which roughly means “petty king.” It’s due to the fact that they have bright yellow or golden  “crowns” on their heads, especially among adult birds. It’s no coincidence that the species belongs to a certain family of birds called Kinglet. The Goldcrest is the smallest European bird, measuring 8.5 to 9.5 centimeters long and weighing 4.7 to 7 grams.