Here are some of the top technology breakthroughs in the 1800s that have changed people’s lives tremendously. An internal combustion engine or ICE, is an engine which converts chemical energy into mechanical energy. It accomplishes that by burning fuel with air in an enclosed chamber.

Towards the end of this century, four-stroke diesel engines and two-stroke gasoline engines were developed. At the beginning of the 19th century, Richard Trevithick built the first working steam locomotive. It had a water boiler which was heated with coal, wood, or oil. The steam produced moved the pistons which in turn moved locomotive’s wheels.

In 1812, the first commercially successful locomotive ran in the United Kingdom. A year later, the Manchester-Liverpool railway line went operational.

Once America had built railroads, it imported its earliest locomotives, Stourbridge Lion and John Bull from Great Britain. Soon after that, it started manufacturing locomotives in-house. After the production started, hundreds of steam locomotives were running on US railways. Extensive railway networks enabled travelers to cross the entire country in a matter of days. A steam engine turns water into steam and uses that pressure to move pistons inside a cylinder. The pistons then move flywheels or connected rods converting that motion into useful work. This is how a steam engine transforms heat into mechanical energy.

The first steam-driven devices were built two thousand years ago in the form of Hero’s engines. The firsts commercially viable steam engine was invented in the first half of the eighteenth century. However, their use did not become widespread until the 19th century, during the industrial revolution. Factories ran on steam engines while locomotives on land and ships in water were also powered by steam engines. The Telegraph used electric signals that were encoded and decoded on the sender’s and receiver’s ends. It used electricity running through copper wires, which made it a rather swift mode of communication feasible over several kilometers.

Earliest designs by a German inventor, Samuel Thomas von Sömmering, at the beginning of the nineteenth century made use of thirty-five wires, one for each numeral and letter of Latin. It employed bubbles rising in acids to encode and decode messages. In the years following this invention, several improvements were made on this design.

Francis Ronald is attributed to the invention of the first functional telegraph in 1816. His design employed wires connected with revolving dials with the alphabet inscribed on them.

This invention shortened the duration of transmitting messages from weeks and months to minutes. Shortly after its invention, the American government appropriated funds to connect the whole country via telegraph wires. And so remote towns and far-flung locations were connected not just to each other but big cities as well. Humanity made a leap from handwritten letters, messenger riders and pigeons, and telegraphs to telephones in the eighteenth century. It was the first invention in the history of humankind that allowed us to communicate directly with people far, far away from us. This technological marvel became vital for businesses, governments, and the general populace.

Alexander Graham Bell is credited with inventing the first device that could clearly replicate human voices over large distances, in 1876. However, the credit for inventing the telephone is controversial, to say the least.

Thanks to this invention, emergency messages could be transmitted and received instantaneously. Businesses could flourish due to constant communication with the outside world. It won’t be an overstatement to say this invention transformed how society communicates. The cotton gin was an invention that efficiently separated seeds from cotton. Manual separation takes a long time and is far less efficient. The separated seeds can be planted to grow more cotton and the refined cotton can be used to produce textiles.

The development of modern cotton gin is attributed to the American inventor, Eli Whitney, towards the end of the eighteenth century. The invention, however, was not without its flaws. It damaged the cotton fibers during separation which couldn’t be used for textiles. Towards the middle of the nineteenth century, improvements were made on the original cotton gin designs, making them faster and more efficient. A few decades after that, Munger system gin was developed, which was not only faster but it left cotton fibers undamaged.

This invention made cotton farming much more profitable, turning it into a crop and America into what historians dub the “world’s first agriculture powerhouse”. The second half of the 19th century witnessed the advent of iron or steel plated armored warships. Wooden ships are vulnerable to explosives and incendiary shells but ironclad ships are not. Battleships, long-range cruise ships, and defense ships were all transformed into ironclad steam-propelled vessels. Advancements in steam propulsion, metallurgy, heavier guns used in navy made steel-built ships viable.

An iron-clad ship has a metal hull, is equipped with shell firing guns, and is propelled by a steam engine. 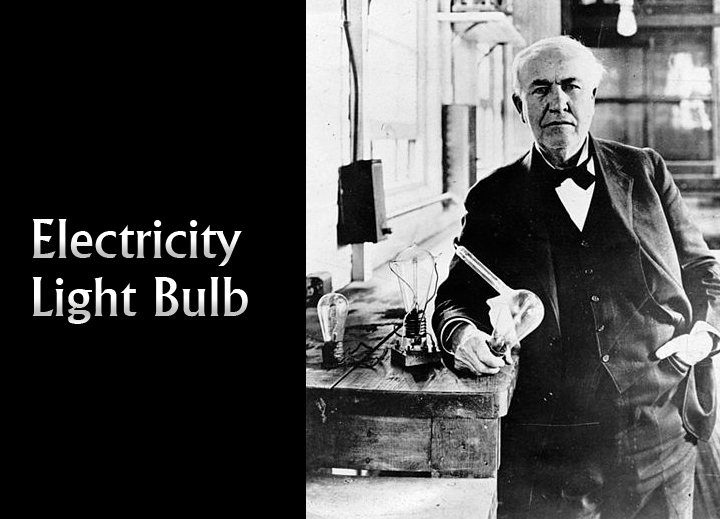 In the decades following Humphry’s invention, it was improved by several other scientists. The invention transitioned from its earliest design – a carbon the arc bulb – to coiled platinum filaments, carbonized paper filaments in a vacuum and finally carbon rods in nitrogen.

In 1878, Thomas Edison patented what is considered the first practical and commercially viable electric bulb design. He used a wide array of materials as filaments and finally settled for carbonized bamboo which was far more durable than any previous designs.

Thomas Edison began mass-producing his patented design in his own manufacturing company.

The widespread use of electric bulbs not only increased hours workers could contribute, but it also minimized the fire hazard risk posed by candles, kerosene lamps, and torches. Before the 19th century, photograms – photographs created without using cameras – were not permanent. In the 1820s, a French inventor, Nicéphore Niépce, found a way to capture images permanently with cameras. He captured the earliest surviving photograph with a camera called, View from the Window at Le Gras. However, it required hours of exposure to light to fix the image in its permanent form. His associate developed a process he called daguerreotypy, which only required minutes and produced much finer results. This marked the birth of the first publicly available photographic process and remained in use for the next two decades.

The year 1848 witnessed the advent of color photography, demonstrated by the French physicist, Edmond Becquerel. The very first color photographs were highly sensitive to light, making them much less durable. His designs were subsequently improved over the decades to follow.

The significance of photography can hardly be exaggerated. It allows us to capture moments that matter to us. And it lets us document important historical events. As opposed to the artist’s renditions, photography enables us to capture people in the flesh, so to speak. The term rifling was originally used to describe the grooving inside barrels which serve to increase accuracy. And it is the barrel of a rifle which sets it apart from other guns, muskets for example which were smooth bored. Grooving provided accuracy by allowing the projectile to spin.

In the early 19th century, when smooth bored muskets were “rifled” and coupled with “Minie” ball projectiles — projectiles in the shape of cones — the first rifle designs were born. In 1885, the first semi-automatic rifle was developed.  In 1886, magazine fed rifles were developed which fired smaller and smokeless cartridges.

When you wrap a coil of wire around a ferromagnetic material – material that is attracted to a permanent magnet – and run a current through it, you get an electromagnet. Unlike permanent magnets, you can control the strength of an electromagnet by changing the number of loops wrapped around the core. It can also be conveniently turned on and off by switching the current on or off.

Electromagnets are at the heart of many modern inventions. Including but not limited to, MRI machines, electrical generators, motors, hard disks, transformers, speakers, and particle accelerators.

In 1820, a groundbreaking discovery was made when a Danish scientist, Hans Christian Ørsted, when he observed that electric current can generate magnetic fields. Four years later, William Sturgeon, invented the first electromagnet. He used non-insulated copper wires, which restricted the number of loops, making the electromagnetic considerably weaker. Six years after its invention, Joseph Henry, an American scientist, used insulated copper wires which substantially improved the strength of electromagnets.

Solar cells, also known as, photovoltaic cells, convert sunlight directly into electricity. While earlier designed were made from Selenium, modern solar cells are silicon-based and are efficient by a long way. Their importance can hardly be overstated. They power our homes, vehicles, gadgets, and even entire states.  And they are a cleaner and greener alternative to fossil fuels.

In 1839, French scientist Edmond Becquerel invented the world’s first solar cell and successfully demonstrated that light can be directly converted into electricity.

The development of the first solid solar cells is credited to an American inventor by the name of Charles Fritts. His invention was only 1 percent efficient and it used a Selenium wafer coated with gold.