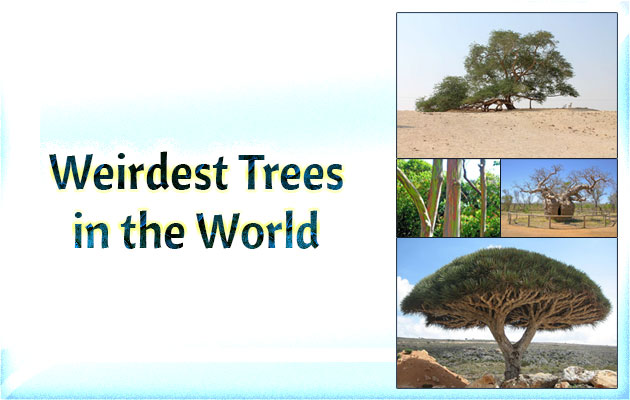 Almost all land creatures, including us humans, have largely benefited from trees. They provide us with oxygen, shade, and food. They absorb carbon, cleaning the air in the process. They also help in stabilizing the soil and in cutting down soil erosion. The trees and the forests provide a habitat for several species of animals as well as plants.

For us humans, trees are of significant economic, industrial, environmental and even spiritual importance. But with over 100,000 existing species in the world, trees are so common that sometimes we take them for granted.

However, there are a few trees that stand out because of their strange (but nevertheless fascinating) appearance and their remarkable survival abilities. Here we list some of them: At first, many thought that The Tule Tree (El Árbol del Tule) was comprised of three trees that grew together as one. However, a comprehensive DNA testing confirmed that the Tule Tree is actually one big and stout Montezuma cypress (Taxodium mucronatum) that is over 300 years old.

This magnificent tree is located on the church grounds of a town named Santa Maria del Tule in the Mexican state of Oaxaca. The Tule Tree has, undisputedly, the stoutest trunk of any tree species in the world, and it is now a candidate of the UNESCO World Heritage Site list. The Yemeni archipelago of Socotra is considered one of the most remote and desolate places on Earth. In addition, Socotra is the home of unique and diverse fauna and flora that cannot be found anywhere else on this planet

It’s not surprising, therefore, that you’d find plants and creatures that are only endemic in Socotra. Perhaps the most famous of them all is the dragon blood tree (Dracaena cinnabari), which survives even the poorest and driest soils. The tree’s thickly packed crown gives it an appearance of an upturned umbrella. This tree is definitely strange not only on the outside but also on the inside. When cut, a blood-like sap oozes out of the trunk, hence the tree’s name. Nope, the tree is not destroyed with paint by some disruptive vandal, but it is painted by nature itself.

The rainbow eucalyptus (Eucalyptus deglupta) is native to the tropical forests of Indonesia and the Philippines. When the tree’s bark strips down, the trunk exposes striking multi-colored streaks that include yellow, purple, pink, green, orange, and red. Finally, the trunk turns to brown.

The rainbow eucalyptus is useful to humans. It is grown either as an ornamental tree for gardens or for making commercial paper. The Boab Prison Tree is a boab tree (Adansonia gregorii) located in the town of Derby, Western Australia. Its trunk’s circumference measures at 14.7 meters (48 feet) and the tree’s age is estimated to be 1,500 years old.

The tree’s stout, the bloated trunk has a hollow space big enough for a human to enter, and it is enough to make you curious. But it may be supposedly tied to a rather atrocious past which would make this tree even more intriguing. It is reputed to have been used during the late 19th century as a temporary prison cell for the aborigines before they were finally taken to court for sentencing. However, there is no historical evidence yet that the Boab Prison Tree had ever been used for holding prisoners. There is a solitary tree that grows in the middle of a vast, arid desert in Bahrain. It is simply called the “Tree of Life,” a tree of the Prosopis cineraria species which is native to the drier regions of Western Asia and India.

This tree is called as such because it is still curiously healthy and lush after 400 years or so, considering it survives in the middle of a desert that sees very little to no rain. And there’s not any other tree or other forms of vegetation growing nearby, which makes the “Tree of Life” a lot more intriguing. It is the only major tree growing in that area.

While there is no clear explanation as to how this mysterious tree survives, one thing’s for sure: it has become a popular tourist attraction. The area sees about 50,000 tourists every year, and they come here just to see and get blown away by a tree that amazingly grows in the middle of nowhere.

More commonly known as the “Dinosaur tree”, the Wollemi Pine tree is native to Australia. They are named after the Natural Park located 150 kilometers away from Sydney, they were first discovered in. They can be up to 40 meters tall and up to a meter wide. The branches either spread out or grow upright. These trees unique and scarce, so they need conservation.

These trees are found in the Crooked forest in the West Pomerania province of Poland. This forest was planted in the early 20th century back when this province was German territory. Every single one of these peculiar trees abruptly bends towards the same direction. Some speculate that an unknown technique was employed to cause sharp bending. Others believe that it was caused by an intense blizzard. Regardless of how they were formed, these trees present a one of its kind view.

Unique to Sierra Bacha region of Mexico, this odd-looking tree is weirdly distributed throughout the region. Its upright branches are arranged at right angles to each other, giving it the appearance of a huge fork. Due to its unique appearance, you could easily mistake it for a huge cactus. It has sweet-scented and cream-colored flowers.

Desert bloodwood or Corymbia opaca is endemic to Australian deserts. Their bark is rough and uneven, and when part of it gets sloughed off, the trunk starts leaking a bright blood-red gum. Hence the name bloodwood. Aborigines collect this fluid for its antiseptic properties.