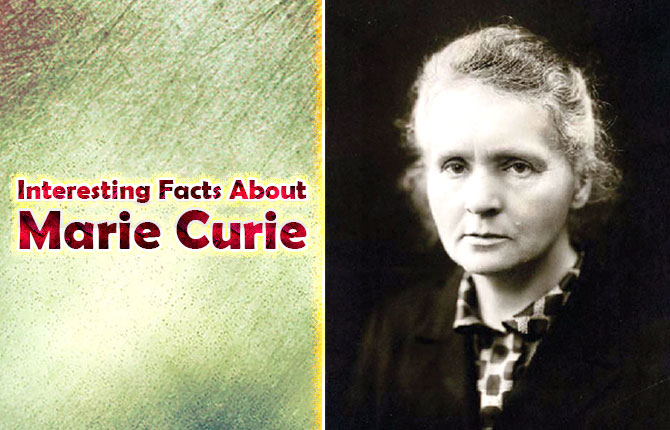 Marie Skłodowska Curie was a Polish-French physicist and chemist known for breaking down barriers in the male-dominated field of science and technology. The pioneer of radioactivity, Curie is regarded as one of the greatest scientists of all time. Here are some more interesting facts about Marie Curie in this gallery. She was the first woman to win the Nobel Prize, the first person and the only female to win two prizes in different sciences. She received the first Nobel Prize in Physics in 1903 as a co-winner along with her physicist husband Pierre Curie, as well as their peer Henri Becquerel. In 1911 Mrs. Curie won the Nobel Prize in Chemistry for her own merits. In 1896 French physicist Henri Becquerel discovered something mysterious about the uranium rays that resembled X-rays and Curie decided to make a research on them. During her study she uncovered many scientific discoveries that would change the face of physical science forever. First, she found out that the uranium’s activity depended on how much the uranium was present. Second, she also discovered that the radiation actually came from the atom itself, not from the result of the interaction of the two molecules. Fortunately, there was one sympathetic Committee member named Gösta Mittage-Leffler, a mathematician who was also an advocate of women’s rights in the field of science and mathematics. Mittage-Leffler wrote to Pierre, warning him of his wife’s omission. In turn, Pierre wrote a complaint to the Committee insisting that Marie should be included in the nomination. Finally, the Committee amended the official nomination, and eventually the Curies and Becquerel jointly won the Nobel Prize in Physics. Pierre and Marie’s first child Irene Joliot-Curie was also a scientist and a Nobel laureate. Irene and her physicist husband Frédéric Joliot-Curie jointly won the Nobel Prize for Chemistry in 1935 for their discovery of artificial radioactivity.

This made Marie and Irene the only mother-and-daughter pair to win Nobel Prizes. Like many pioneering scientists of radiation, Marie Curie had no idea about the long-term effects of radiation to one’s health. Needless to say, she worked without any safety measures or safety gear; she even carried radioactive isotopes in her pocket and kept them in her desk drawer.

She died in 1934 due to aplastic anemia, possibly as a result of her prolonged exposure to radiation. Because of the high levels of radioactivity, many of Marie’s personal belongings — her research papers and even her cookbooks — are highly radioactive and are now kept in lead-lined boxes. Those who wish to open the boxes and see her manuscripts are required to wear a special protective clothing. Albert Einstein and Marie Curie first met at the First Solvay Conference in 1911, where she was the only woman present in the group of 24 scientists! Einstein was immediately impressed by Curie so much so it is not surprising that he came to her defense when she was rocked by a scandal that almost ruined her life.

Curie, already a widow by that time, was having an affair with Paul Langevin who had been a former student of her husband Pierre. Langevin was married although he had been estranged from his wife for some time. The press, discovering of the affair, labeled her as a “Jewish home-wrecker.”

Although Curie had won her second Nobel, the Committee discouraged her from traveling to Sweden to accept it so as to prevent the scandal from following her all the way there. These incidents had made the lowest point of Curie’s life.

Around this time, Einstein sent Curie a letter in which described his admiration for her as well as his words of encouragement. In the letter, Einstein urged her “to simply not read that hogwash, but rather leave it to the reptile for whom it has been fabricated.”

It is interesting to note that Curie’s granddaughter Helene Joliot married Langevin’s grandson, Michael. They are both nuclear physicists. During her early years in Paris, Curie (then as Maria Skłodowska) enrolled at the Sorbonne to pursue her studies in chemistry, physics and mathematics. She studied by day and tutored by night. Impoverished, overworked and suffering from the cold winters, she would occasionally faint from hunger.

In 1893 Curie received a degree in Physics and obtained a second degree the following year. Like a lot of scientists, Marie Curie was an atheist or someone who believes there is no God or any other divinity. But unlike other scientists who found their non-belief on the nature of their work that disproves God’s existence, Curie had a more different and personal reason.

Both of her parents were teachers. Check out the best teacher desks here. While Curie’s father was an atheist, her mother was a devout Catholic. When she was a child, her oldest sibling and then her mother passed away. The deaths of her loved ones early in her life led Curie to abandon Christianity and become an atheist. When Marie Skłodowska started her scientific career during the mid-1890s, she was looking for a bigger laboratory space. Polish professor Józef Wierusz-Kowalski introduced her to Pierre Curie, thinking that the French physicist had such space. Although he actually didn’t have a large laboratory space, Pierre managed to find some room for Marie so that she could start her work.

As you might have guessed it, the Pierre and Marie’s shared passion for science eventually translated into love for each other. They married in 1895 and eventually had two daughters together. There is a university in the city of Lublin, Poland called Maria Curie-Skłodowska University, named after the renowned scientist. Established in 1944, it has faculties in biology and biotechnology, chemistry, mathematics, physics and computer science as well as arts, humanities, political science and law.