Mars has never failed to fascinate us. Does it really have any signs of life there? There are missions such as the Mars One or the ExoMars project which will help us find out whether or not human settlement is possible in the Red Planet. Here are some of the more interesting and fascinating facts about Mars. It is equivalent to 1.9 Earth years. This is because Mars is much farther away from the Sun and its orbital period is considerably much greater than that of the Earth. Mars’ weak magnetic field could be the reason why its atmosphere is very thin. However, some scientists believe that it used to have a magnetic field about 4 billion years ago. Mars experiences all four seasons, just like Earth. However, since it has a bit more elliptical (oval) orbit around the Sun, the length of each season is not of the same duration. Mars is one of the terrestrial planets (planets with an actual rocky terrain), and also the last after Mercury, Venus and Earth. Like Earth, Mars also has a North and a South pole, both of which have ice caps. Water has also been discovered beneath Mars’ ice caps. Italian astronomer Giovanni Schiaparelli discovered the grooves across Mars’ surface. He believed that these lines didn’t come naturally and was most likely an evidence of intelligent life. However, these lines only came out as mere optical illusions. Mars’ biggest moon Phobos will be disintegrated by gravitational forces which will lead to the formation of the ring around the planet. Only you’ll wait 20-40 years though to see that happen. A total of 39 missions have landed on Mars, but 16 of them have been successful. The first mission was USSR’s Marsnik 1 which took off in 1960. These missions include orbiters, landers and rovers. In 2016, a project called Exobiology on Mars (aka ExoMars) will search for signs of Martial life A hail of meteorites from Mars crashes to Earth, which allows scientists to start studying on Mars long before the advent of space missions. 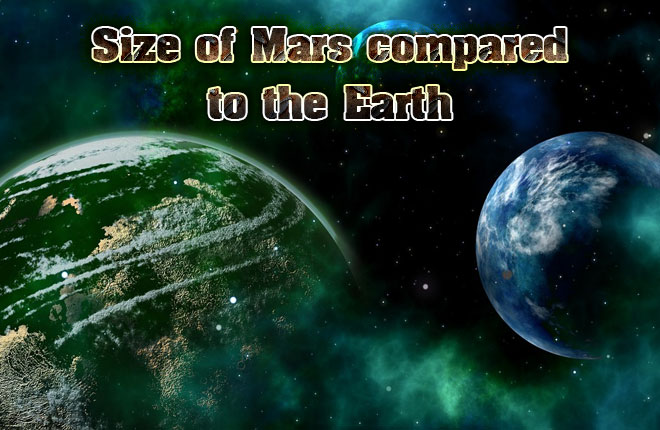 Mars is much smaller than Earth. While the Earth’s diameter at the equator is 12,756 kilometers, Mars’ has 6,794 kilometers. Mars has been known to have water, but in the form of ice. However, in recent years satellite images have shown that liquid water is also present in Mars. Liquid water is found in the planet’s dark stripes or noticeable marks on cliffs and crater surfaces. Mars has the tallest mountain on any planet of the solar system: the Mount Olympus. It rises 69,630 feet — about three times the height of Mount Everest. Many scientists still believe that this billion-years-old shield volcano is still active. That’s why a number of missions are lined up for the next decade of so to discover more about Mars as well as to determine whether or not it will be a livable planet. Blame it on Mars’ elliptical orbit movement around the sun, which causes the planet to experience severe dust storms that can last for several months.