Which creatures in the world are the deadliest? What you are going to see here in this gallery may surprise you! A lot of people are afraid of sharks, with their menacing appearance and razor-sharp teeth. But you’re surprised they’re not the top of this list! Although wolf attacks on humans do occur, they are quite rare in comparison to other animals. They may attack because of defense, if provoked. If otherwise making an unprovoked attack, these animals may likely be predatory. Whatever the reason, you should avoid them as much as possible — there’s a high probability that they carry rabies like other wild animals. Two of the most well-documented lion attacks include the Tsavo maneaters in 1898 and the Lions of Njombe (whose attacks on humans occurred between 1932 and 1947).

One of the chief factors why lions become man-eaters is the deprivation of their natural prey. However, some sources even cite that elephants kill about 200-500 people each year. Elephants are highly intelligent and social creatures. However, they are also notorious for their violent rage which leads them to make fatal attacks.

Females tend to be more aggressive, especially when protecting their young. Males, on the other hand, are seen as more laid-back. However, males experience a periodic condition called musth, driven by high testosterone levels. Even the most placid and docile-looking male elephants in musth will be likely to make an unprovoked attack. Hippos are easily frightened and are very, very aggressive. They might be heavy, but don’t be too easy on it — hippos are fast runners and can outrun you! Although crocodiles are not exactly fast animals, they are nevertheless feared as man-eaters because they kill their prey by ambush. So the best thing to do is to avoid swimming in areas where there are crocodiles. Farm animals such as cows can get tapeworms from grazing or drinking contaminated water. Humans who eat under-cooked meat from infected animals are likely to have tapeworms. Symptoms include nausea, vomiting, general weakness as well as worms in stools. Tsetse or tzetze fly is a biting fly that feeds on the blood of vertebrates. They are the vectors of certain parasites that cause the deadly “sleeping sickness” in sub-Saharan Africa. They are also known as “kissing bugs” from their habit of biting people around the lips. These blood-suckers are the vectors of the parasites that cause the Chagas disease, which destroys the organs and can be fatal. In the United States, fatal dog attacks are quite rare. Nearly 5 million Americans are bitten by a dog each year, although only 20 to 30 cases result in death. In many parts of the world though, deaths from dog bites are a bit more frequent especially in regions without any rabies vaccinations. Fido isn’t always your best friend after all. The country with the most snakebite fatalities is India, with more than 11,000 lives lost.

Among the most venomous snakes are vipers (including rattlesnakes and adders), cobras, tiger snakes, taipans, and the most feared of all, the black mamba. 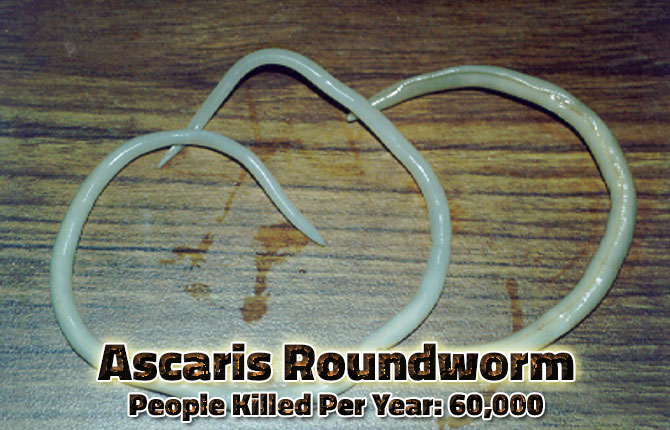 Ascaris roundworms are intestinal parasites that cause the condition ascariasis. Ingesting objects contaminated with fecal matter with eggs is the chief cause of this disease. Schistosomiasis is more prevalent in the developing countries where people tend to swim in the contaminated waters. A lot of people are even more afraid of other fellow human beings than they’re afraid of wild animals. And that’s quite understandable. Humans are highly capable of making calculated, cold-blooded killings, especially when driven by multiple factors that range from extreme jealousy to greed for money and power, to revenge. This little creature is responsible for 725,000 deaths per year (although some sources say over a million!). As of 2015, there are an estimated 438,000 malaria deaths worldwide, out of 214 million cases. Other mosquito-borne diseases include yellow fever, dengue fever, encephalitis and most recently, the Zika virus.